Evolution of Wearables - What is in store?

Many of us are hearing more and more about fitness bands and some are using these. Big players are now rolling out smart watches, which has disrupted the basic fitness bands considerably in a very short span of time, as these smart watches have these basic fitness features within. Wearables like, glasses, jewellery, headgear, belts, armwear, wristwear, legwear, footwear, skin patches, exoskeletons and textiles, etc are also increasingly becoming "Smart". These emerging smart devices can be worn by human beings, which will collect various data based on embedded sensors and provide useful information that will help improve oneself, which could be on physical fitness, health, etc. 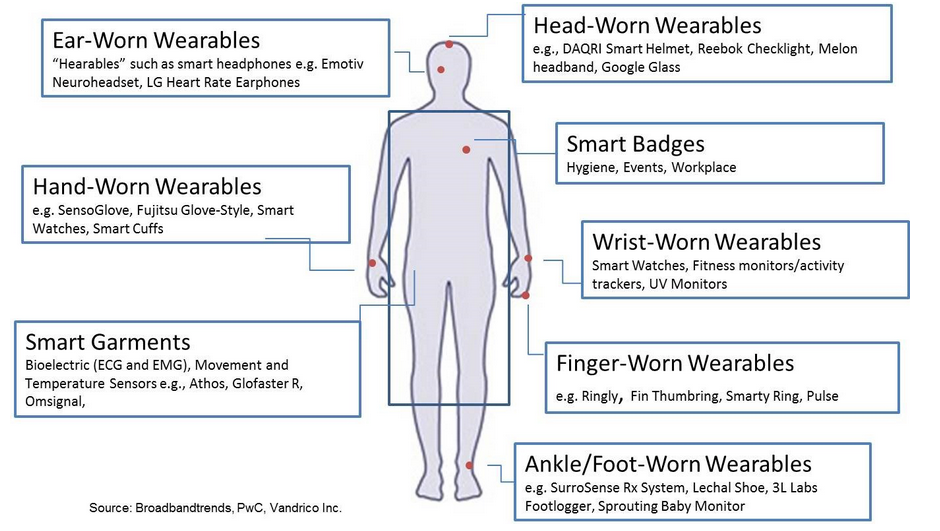 Who are at it?

Amongst many others, companies like Google, Samsung, Fitbit, Jawbone, GoQii, LG, Sony have been into Wearable devices and the competition is heating up as big players like Intel and Apple are betting big on this market.

Fitbit dominated the market for “basic bands,” according to Canalys’ market estimates, with more than 50 percent market share in the second half of the year. The Jawbone UP came second, cutting itself around a fifth of the pie, followed by Nike with its Fuelband.

The market forecast and the trend makes us feel that this wearable space could potentially disrupt many of the traditional devices. Thus many are looking at embracing this market either to see how this could disrupt their product line or to see if they have an opportunity in this space.

NeuroMetrix of Waltham will be jumping into the market for wearable electronic devices. But the company's new Quell device - an over-the-counter version of its Sensus device for management of chronic pain - is an actual medical device that is used to manage pain.

TomTom, the Dutch brand known for its standalone GPS navigators among other things, has brought its line of sports watches to India. TomTom launched four fitness wearables, which include TomTom Runner and Multi-Sport GPS watches, which deliever real time stats such as time, distance, pace, speed and calories burnt to runners, swimmers and cyclists.

Xiaomi said in a press release that local sales of its Mi Band - a fitness tracking bracelet that can be powered for 30 days on a single charge, has surpassed 100,000 units since it was unveiled. The Beijing-based company forecast that more than 500,000 Mi Bands will be sold in Taiwan by the end of the year, giving it the biggest share of the country's wearable device market that is currently led by Sony Corp. and Samsung Electronics Co.

Intel is firing on all cylinders to expand into the growing wearable technology arena such as smart watches and other Internet-enabled wearables. This investment in Vuzix Corporation is yet another effort by the chipmaker in this regard. Intel has unveiled Curie, a low-powered module no bigger than a button, as part of its vision to lead in the wearables field.

Rumors have said that HTC will be launching a smartwatch at the upcoming CES. The initially planned unveiling of the device was back in October, but the date was pushed back to CES 2015. Details of the device are unclear though, as it could be a smartwatch or a fitness tracker.

In addition to all these devices, there will also be wearable technology focusing on health and fitness, prosthetics and smart clothing.

Shipments of smart wearables are expected to grow from 9.7 million in 2013 to 135 million in 2018, according to CCS Insight's new global forecast. The forecast predicts that wrist-worn devices will account for 87% of wearables to be shipped in 2018 — comprising 68 million smartwatches and 50 million smart bands with no screen or with a minimal, one-line display.

The smartwatch will be the leading product category and take an increasingly large share of wearable shipments. We estimate smartwatch shipments will rise by a compound annual rate of 41% over the next five years. Smartwatches will account for 59% of total wearable device shipments this year, and that share will expand to just over 70% of shipments by 2019.

The dominant sector will remain the healthcare sector which merges medical, fitness and wellness. It has the largest number of big names such as Apple, Accenture, Adidas, Fujitsu, Nike, Philips, Reebock, Samsung, SAP and Roche behind the most promising new developments.

Google's Android could be critical for developing the smart devices ecosystem, though significant changes will be required before it is suitable for all kinds of wearable devices. Google has already released Android Wear, targeted for smart watches.

Samsung, Google, Apple, with their massive war chests, have come into this market. They’re going to really help elevate the category for consumers. They’re going to help people understand the kinds of benefits that they can get from these products. The next few years, will see activity trackers with a little bit more biosensing data, and smart watches that people are going to have to charge every night.

If Wearables 1.0 was about creating the basic technologies for the wearable devices, Wearables 2.0 was and still is about crafting rich, robust business models based on these technologies. Wearables 3.0 will be all about perfecting, expanding and engaging customers at a level never experienced before. Big players in Wearable Technology and Internet of Things, from healthcare companies to insurance corporations, from high street retailers to music industry, Google, Apple, Samsung, Mercedes, Nike, Audi, just to name a few are all to give for free their devices in exchange for data.

What could be the future?

Though it’s easy to be pessimistic, one cannot ignore the potential that this market has in store. In any event, while we wait for this category to evolve, it’s entertaining to watch the puzzle pieces slowly come together. Convergence is expected, in much the same way that the smartphone extended the basic functionalities of the feature phone and disrupted certain traditional devices like point and shoot camera.

Medical and Wellness segment could be the one which will embrace this category of wearable devices and make health more affordable and self manageable for every one. For instance, one can wear a virtual doctor while on a specific treatment. A better example could be that the advances in wearable devices could lead to a scenario, where a diabetes patient may get appropriate doses of insulin administered into his body automatically based on various data collected by the sensors worn around the body. This could be risky, if the data, so collected are inaccurate and that is one of the major concern that is expected to be addressed in the coming years.

There has to be a marriage of fitness devices and medical management devices to really impact patient health. The future of wearable technology in fitness and health isn’t about the fitness bands and health monitors – it’s about what can be done with the data they collect, which means that these devices have to be supplemented by smart applications that are powered by big data and analytics tools.

A very large percentage of the population already owns a smart phone, which has lot many capabilities, including that of the basic wearable devices. As such, it will be critical that wearables provide a distinct value proposition that is separate and different than the smartphone, although the smartphone will likely still act as the “hub” to collect information.

We’re already starting to see sensor-embedded running vests and smart socks. But we could soon see jackets with solar panels (to recharge your gadgets on the go), 3D printed dresses that everyone can afford, health-monitoring underwear, even clothes that react to light. If we had the ability to change the look of all of our clothes, just by fiddling with our phones, it would mean less spending on new gear and plenty of spare wardrobe space.

Wearables need to move beyond the gamification of fitness to focus on monitoring and improving our health. With extra sensors and smarter and reliable algorithms, future devices should be able to warn us of high blood pressure and dehydration, fatigue and stress. Perhaps then, forewarned by data we understand, we’ll find wearables more compelling.

In Wearable Tech 3.0 Security is paramount. Six months from now and we’ll understand how poor the wearables 1.0 security was, if any! The big players in this market should finally draw, define and release the IoT and Wearables industry Security Standards. Wearable Tech 3.0 is the beginning of a new era where enterprises provide real value to their customers, a key technology benefit in the age of the customer.
Posted by Kannan Subbiah at 12:40 AM