A Framework for Cloud Strategy and Planning

Cloud technologies are here to stay, but not without concerns. The concerns are different for different organizations and there is no ‘one size fits all’ solution to have these concerns addressed. It is for the enterprise to come up with a cloud strategy and carefully weigh the pros and cons of cloud adoption with due consideration to the competing constraints. When not done well, this could have telling impact on the business.

A model based approach or a framework based approach to come up with the cloud strategy could help maximize value creation out of cloud adoption. With their expertise on the standards and frameworks and on the internal business capabilities, the Enterprise Architects are in the best position to take this mantle. Though there are various standards and frameworks that can be used to strategize and plan the Cloud Adoption, Mike Walker in his article suggests a simple three step framework for Cloud Strategy and Planning, which he adopts from TOGAF and other frameworks. The following diagram visualizes the mapping of the TOGAF methods to the Cloud Strategy Planning Framework. 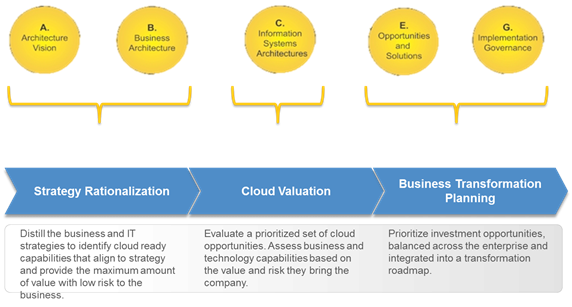 The following are the seven activities that forms part of the three step Cloud Strategy Planning Framework:

1. Establish Scope and Approach - This activity is all about educating or envisioning the stakeholders about the cloud computing and then come up with the business model for cloud computing

2. Set Strategic Vision - This is about understanding and coming up with a strategic vision for cloud computing in the enterprise and for the purpose, due consideration shall be given to the IT and Business strategic objectives of the organization, the cloud computing patterns and technologies and the feasibility and readiness.

3. Identify & Prioritize Capabilities - This is an important activity as it lays down the criteria for evaluating the capabilities in the form of IT and business value drivers. The outcome of this activity would be the key capabilities that are subject to further analysis.

4. Profile Capabilities - This again is a critical activity, in which the current maturity levels of the capabilities are determined and then other risks and other constraints like architectural fit, readiness, feasibility etc are assessed.

5. Recommend Deployment Patterns - Based on the capability profiling come up with recommended cloud services and the deployment patterns based on architectural fit, value and risk. Of course this will call for due consideration of the proven practices, and the industry trend.

6. Define and Prioritize Opportunities - This activity is more like coming up with a business case for an opportunity for cloud transformation and yes, this should include the perceived benefits, expected risks, technology impacts, and a detailed architecture..

7. Define Business Transformation Roamap - This activity is about performing an assessment of implementation risks and dependencies and develop a transformation roadmap, which should be validated with the business users.

In line with the above framework, Mike Walker suggests a top down model as below: 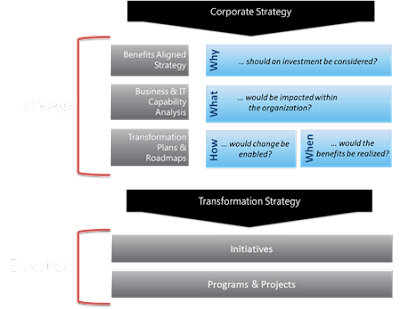 You may wish to check out the original article here.

Posted by Kannan Subbiah at 7:37 AM 0 comments

What you will find about NGINX from its website is that it is a free, open source light weight HTTP web server and a reverse proxy. Nginx doesn't rely on threads to handle requests. Instead it uses a much more scalable event-driven (asynchronous) architecture. This architecture uses small, but more importantly, predictable amounts of memory under load. We have found that it is holding up to what it says. Here is how we ended up using NGINX for one of our client and have found it meeting up to our expectation.


We were on a performance testing assignment of a game application, where much of the game contents were static flash files (of course they are dynamic as they had embedded action scripts for execution in the front end) and image files of which quite many are of sizes above 500KB. Need not to mention that this is the compressed size and as such enabling compression did not offered any performance gains. These files were served by Apache, which also serves dynamic php requests.


Our initial performance tests did indicated that for about 1000 concurrent hits, the Apache server memory consumption shot up considerably beyond 2 GB and also quite many requests were timing out. Examination of the server configuration did reveal that the server is configured to serve 256 child processes and also that it was configured to use the ‘prefork’ mpm module, which limits each child process to use only one thread. This technically limits the number of concurrent requests the Apache Server can serve to 256.


We also figured out that Apache needs to use ‘prefork’ module in order to safely serve PHP requests. Though later versions of PHP are found to be working with the other mpm module (‘worker’, which can use multiple threads per child process) many still have concerns around thread safety. The 256 client process limit is also a hard limit and if that needs to be increased, the Apache server needs to be rebuilt.


We performed the tests again and have found tremendous improvement. The average latency at 1000 concurrent hits stress level has come down to under 5 seconds from about 80 seconds. We could also observe that NGINX was consuming just around 10MB. NGINX, by itself does not has any limitation on the number concurrent threads and it is constrained by the limits of the server itself and other daemons running on it.
Posted by Kannan Subbiah at 1:34 AM 0 comments